All departing flights from Terminal T2 will check-in at the T2B area. Access to the boarding gates will only be through the security filter in the T2B area. T2C remains closed -

The terminal T2 is divided into modules T2A, T2B and T2C. The three modules are not connected from the inside via the public areas, but are connected via the boarding area (access only for passengers). The T2B terminal lobby is divided into three areas known as Terminal B, Olympic Terminal and Intermodal Building

You can see the airport map to see the facilities and infrastructure of terminal T2.

Car rental companies of terminal T2 have their offices on the ground floor of terminal T2B.
Rent your car now to get better cars and cheaper prices.

The Terminal T2 car park of Barcelona airport is located opposite and along Terminal T2 and covers the three terminals: T2A, T2B and T2C. It is connected to Terminal 2 through pedestrian walkways in T2A and T2C of approximately 150 meters.
Parking for the Corporate Aviation Terminal is independent from the buildings of terminal T2 and is located about 700 meters away from terminal T2C.

Airlines and check-in at terminal T2

Sales and information offices of some airlines, and their check-in desks, are located in the ground floor of the terminal building.

Terminal T2A does not have check-in counters, so check-in is done at terminals T2B floor P0, and at T2C floor P0 for easyjet companies and its subsidiary easyjet Switzerland.

For families traveling with children, the airport has preferential access in the security filter for easy passage to the boarding area.

Terminal T2, level 1, at the entrances to the Boarding areas.

The different boarding areas are located as follows:

The terminal has three baggage reclaim halls, hall A, hall B and hall C. Depending on the origin of the flight, whether it originated in Schengen countries or not, passengers must collect the checked baggage:

As an exception, the companies easyJet and easyJet Switzerland deliver their luggage in Room B.

Check the details of the baggage handling companies and which room they deliver the luggage to.

Shopping and dinning at terminal T2

You can enjoy a world class shopping experience in terminal T2, with restaurants, cafes, fashion and accessories, book stores, souvenir shops and much more. Most shops are located in the Departures area of the terminal, after security check points, but there are shops available land side in Arrivals area and before security check points. Go to shops at terminal T2 and see the shop profile for more information on its location.

Bus Transit is the free shuttle service that connects the terminals T1 and T2. For further information about Bus Transit and other alternatives of connection through public transport please visit transport between terminals.

Getting to and from the airport. Private and public transport.

Go to the airport using your car, hiring a taxi or using public transportation, by metro and bus: Aerobus A2, L77, PR1, L46 and N17, if you are near Barcelona or downtown. People also arrive to the airport by train to terminal T2.

From other provinces, such us Tarragona, Reus or Girona, you can get/leave the airport through the medium and long distance coach service.

Other convenient options are private transport door to door or share transport with a bus or minibus with other passengers. 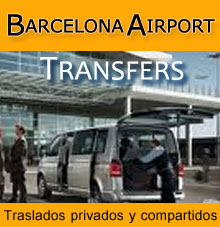 Sleeping at the airport